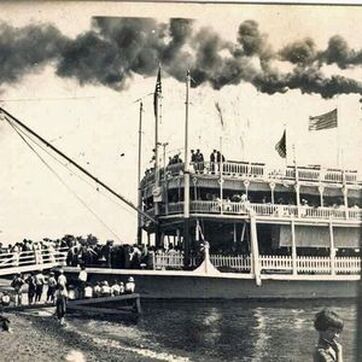 The steamboat St. Paul at the Washington Street landing in about 1890
Lake City is homeland of the Dakhóta (Dakota) people who have been on this land for thousands of years. Exploration of the area by Europeans is believed to date to 1654. Both the French and British came to the area as traders and missionaries, many establishing kinship relationships with Dakota communities. Lake City is notable as one of the few cities founded within a tract of land set aside as a Reservation for the children born of these relationships.

The ‘Sioux Half-Breed Reserve on Lake Pepin’ ran 32 miles along Lake Pepin, from Red Wing to Kellogg, and inland 15 miles. It was eventually surveyed at a little over 320,000 acres. The tract was taken out of Dakota tribal lands by an 1830 treaty, and thus escaped the later land cessions that transferred southern Minnesota to the United States.

The Reservation was doubtless made through the influence of traders and those in their employ who had married Dakota women. In 1851, when the rest of ancestral Dakota land in the area was relinquished by treaty, traders tried to have a cash settlement for the Reservation inserted into the agreement. Governor Ramsey agreed, but Congress refused to make the payment.

In 1854, Henry Rice introduced legislation in the U.S. Senate to issue scrip certificates, granting the ‘half breeds or mixed-bloods of the Dakota or Sioux nation of Indians’ up to 640 acres each on unoccupied, unsurveyed lands in exchange for relinquishing all rights in the Half Breed Tract. A census was carried out and more than 600 persons found to be eligible for scrip. Rice claimed publicly that the law protected the recipients of the scrip ‘in every respect.’ Privately, he told friends that the bill would create an opportunity for considerable profits.

Before legal land title could be established in the tract, settlement by speculators from New York and other eastern states began. In 1853, Jacob Broody was the first to arrive. A year later, former President Millard Fillmore led the Grand Excursion which brought newspaper reporters and tourists upriver on a flotilla of excursion boats. Travelers spent a night on Lake Pepin before proceeding upriver to St. Paul. Abner Dwelle came to the area shortly thereafter.

All land in rapidly developing Lake City, was claimed from the United States government using scrip. Madeline Racicot was an eligible Dakota person, but as a married woman it was her husband Oliver who controlled their property. Rights to at least one of her scrip certificates was sold to speculator Asa Doughty. Oliver, with Madeline’s scrip certificate in hand, made an entry on May 21, 1857 for a little less than 160 acres that now comprise several neighborhoods of Lake City. A Land Patent, the instrument used to convey ownership of US Government land to an individual, was issued, to Madeline on Jan 10, 1859. Thereafter, land transactions were done legally for land that was initially secured with her scrip.

The first Lake [City] Township meeting was held in May of 1858. In 1864, Township supervisors were given special powers by the Minnesota Legislature. They were equivalent in general terms to those usually exercised by the board of trustees of an incorporated village, or the common council of an incorporated city, but these special powers were made applicable to a particularly specified section of the town, that being the business district sprouting up along Franklin, Washington, and Main Streets. “Thenceforth the town supervisors of Lake City had a corporation to look after, which was not incorporated, and the district above described had all the honors and privileges of an incorporated village or city without its liabilities and many of its burdens.”

Township supervisors returned to the state legislature several times, securing provisions regarding sidewalks, road and bridge maintenance, licenses, gaming, fire prevention, jail, street construction, and the levee. The question of formally organizing the city was discussed at a meeting of citizens on January 19, 1867. It was rejected.

It is likely that construction of the railroad, and looming payment of the bonds to finance it, drew attention to the urgency of incorporation. Citizens petitioned for incorporation, and a judge had the duty to set an election, but it was never held. Two legal opinions were in support of incorporation and it finally went forward in the next legislative session. The booming city was incorporated in 1872. The railroad was completed, and mail service started, later the same year.

The mission of the Lake City Historical Society is to collect, preserve, display and disseminate the history of Lake City, Minnesota.